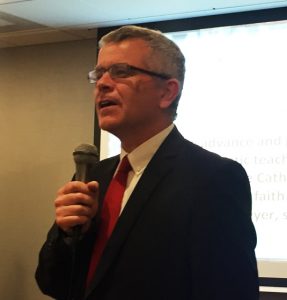 Patrick McCrystal is a pharmacist originally from Northern Ireland. Graduating from Queen's University, Belfast in 1987, he ceased dispensing the contraceptive pill and other abortifacients in 1993 and was subsequently unemployed for three years, even though he attended about 30 interviews.

In 1996 he wrote his first book entitled "Contraception and Evangelium Vitae". This book explored the abortifacient nature of the pill and was published by Human Life International (Ireland).

He acted as Executive Director of HLI (Ireland) since 1997. He is married to Therese and they have nine children here, six gone to God by miscarriage.

He and his wife Therese featured on EWTN’s (Eternal Word Television network) documentary produced by HLI entitled "Death in the Water", a story of how HLI (Ireland) counteracted the propaganda of the Dutch abortion ship which came to Ireland in 2001.

He is author of his second book entitled "Who's at the Centre of your marriage...the Pill or Jesus Christ?" Published by Human Life International (Ireland) (HLI Ireland) in 2009 a core message of the book is that if a married couple wish to maximise their marital harmony they absolutely must avoid contraception and the book outlines the reasons why.

The book deals with the medical, social, statistical, historical, global and faith viewpoints, containing the testimonies of a number of married couples.

Bearing the imprimatur of Bishop Noel Treanor, of Down and Connor diocese, the book was launched in Ireland amidst a flurry of media attention and Mr McCrystal had 21 secular radio interviews whilst conducting a two week nationwide speaking tour in Ireland promoting the book.

The book is currently being used as a principal text in a number of pre-marriage courses in Ireland.

In July 2009, he was invited by the Franciscan Friars of the Renewal to Lebanon as part of a ten man team conducting a pro-life, pro-faith mission throughout the nation.  He was interviewed twice on Lebanon's Catholic Telelumiere Catholic satellite network, which beams into every Arabic speaking nation in the world.

In December 2009, he was invited to Germany to conduct a five day retreat on Pope Paul VI’s encyclical Humanae Vitae during which he gave thirteen talks on the encyclical.

In July 2010 he travelled to the U.S.A. for four T.V. interviews on his book for EWTN's global Catholic satellite network. His book subsequently went all over the world in every continent. You can view these TV interviews below:

In August 2010, he and colleagues moved HLI (Ireland)’s entire operation to Knock, Co Mayo Ireland, where they opened the Guadalupe Centre, a Catholic pro-life centre. In May 2013, they opened the “Cloak” charity shop under the patronage of St. Joseph. They run the Ask Majella crisis pregnancy network in 32 counties in Ireland. They are European base for Johnnette Benkovic’s Women of Grace programme, a 9 week DVD study series on authentic Catholic femininity, as well as European distributor for Simon Peter Press’s 14 booklet series on exposing the New Age movement.

Promoting an annual rosary campaign, the Holy Face of Jesus devotion, printing a myriad of Catholic and pro-life resources, newsletters and conducting regular conferences and retreats.

In June 2013, Patrick and colleagues are mailing every pharmacy in Ireland in a survey on the so-called “morning-after” pill and other abortifacients.